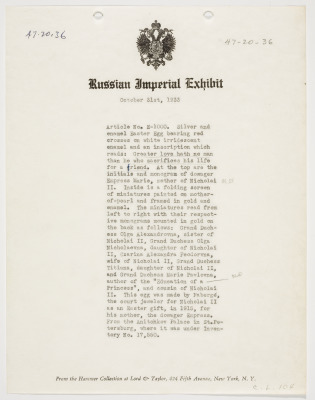 Transcription: [double-headed eagle] RUSSIAN IMPERIAL EXHIBIT October 31st, 1933 Article No. E-1000. Silver and enamel Easter Egg bearing red crosses on white iridescent enamel and an inscription which reads: Greater love hath no man than he who sacrifices his life for a friend [underlined]. At the top are the initials and monogram of dowager Empress Marie, mother of Nicholai II. Inside is a folding screen of miniatures painted on mother-of-pearl and framed in gold and enamel. The miniatures read from left to right with their respective monograms mounted in gold on the back as follows: Grand Duchess Olga Alexandrovna, sister of Nicholai II, Grand Duchess Olga Nicholaevna, daughter of Nicholai II, Czarina Alexandra Feodorovna, wife of Nicholai II, Grand Duchess Titiana, daughter of Nicholai II, and Grand Duchess Marie Pavlovna, author of the “Education of a Princess”, and cousin of Nicholai II. This egg was made by Fabergé, the court jeweler for Nicholai II as an Easter gift, in 1915, for his mother, the dowager Empress. From the Anitchkov Palace in St. Petersburg, where it was under Inventory No. 17,550.