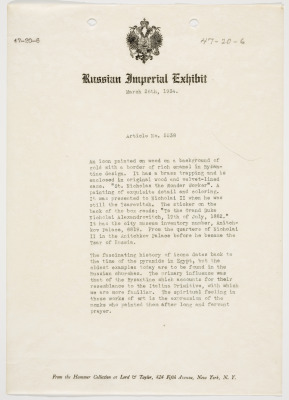 Transcription: [double-headed eagle] RUSSIAN IMPERIAL EXHIBIT March 26th, 1934. Article No. 5538 An icon painted on wood on a background of gold with a border of rich enamel in Byzantine design. It has a brass trapping and is enclosed in original wood and velvet-lined case. “St. Nicholas the Wonder Worker”. A painting of exquisite detail and coloring. It was presented to Nicholai II when he was still the Tsarevitch. The sticker on the back of the box reads: “To the Grand Duke Nicholai Alexandrovitch, 19th of July, 1882.” It has the city museum inventory number, Anitchkov Palace, 6819. From the quarters of Nicholai II in the Anitchkov Palace before he became the Tsar of Russia. The fascinating history of icons dates back to the time of the pyramids in Egypt, but the oldest examples today are to be found in the Russian churches. The primary influence was that of the Byzantine which accounts for their resemblance to the Italina (sic) Primitive, with which we are more familiar. The spiritual feeling in these works of art is the expression of the monks who painted them after long and fervent prayer.