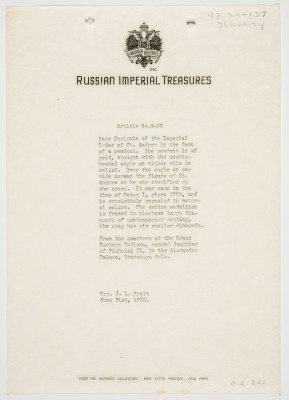 Rare Insignia of the Imperial Order of St. Andrew in the form of a pendant. The pendant is of gold, wrought with the double-headed eagle on either side in relief. Over the eagle on one side appeas [sic] the figure of St. Andrew as he was crucified on the cross. It was made in the time of Peter I, circa 1720, and is exquisitely enemaled [sic] in natural colors. The entire medallion is framed in nineteen large diamonds of contemporary cutting, the ring has six smaller diamonds.

From the quarters of the Grand Duchess Tatiana, second daughter of Nicholai II, in the Alexander Palace, Tsarskoye Selo.