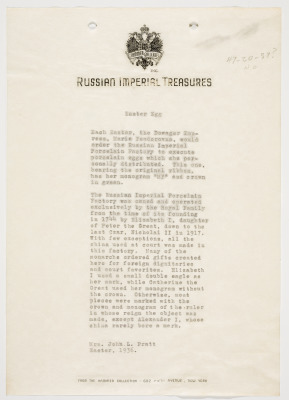 Transcription: [double-headed eagle] RUSSIAN IMPERIAL TREASURES Easter Egg Each Easter, the Dowager Empress, Marie Feodorovna, would order the Russian Imperial Porcelain Factory to execute porcelain eggs which she personally distributed. This one, bearing the original ribbon, has her monogram “MF” and crown in green. The Russian Imperial Porcelain Factory was owned and operated exclusively by the Royal Family from the time of its founding in 1744 by Elizabeth I, daughter of Peter the Great, down to the last Czar, Nicholai II in 1917. With few exceptions, all the china used at court was made in this factory. Many of the monarchs ordered gifts created here for foreign dignitaries and court favorites. Elizabeth I used a small double eagle as her mark, while Catherine the Great used her monogram without the crown. Otherwise, most pieces were marked with the crown and monogram of the ruler in whose reign the object was made, except Alexander I, whose china rarely bore a mark.