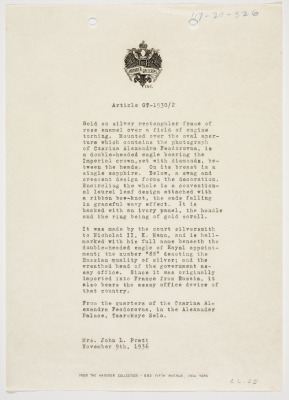 Gold on silver rectangular frame of rose enamel over a field of engine turning. Mounted over the oval aperture which contains the photograph of Czarina Alexandra Feodorovna, is a double-headed eagle bearing the Imperial crown, set with diamonds, between the heads. On its breast is a single sapphire. Below, a swag and crescent design forms the decoration. Encircling the whole is a conventional laurel leaf design attached with a ribbon bow-knot, the ends falling in graceful wavy effect. It is backed with an ivory panel, the handle and the ring being of gold scroll.

It was made by the court silversmith to Nicholai II, K. Hann, and is hallmarked with his full name beneath the double-headed eagle of Royal appointment; the number “88” denoting the Russian quality of silver; and the wreathed head of the government assay office. Since it was originally imported into France from Russia, it also bears the assay office device of that country.

From the quarters of the Czarina Alexandra Feodorovna, in the Alexander Palace, Tsarskoye Selo.