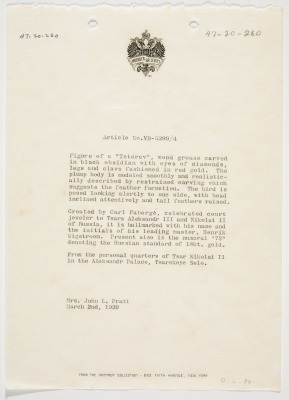 Transcription: [double-headed eagle] Article No.VD-5399/4 Figure of a “Teterev”, wood grouse carved in black obsidian with eyes of diamonds, legs and claws fashioned in red gold. The plump body is modeled smoothly and realistically described by restrained carving which suggests the feathered formation. The bird is posed looking alertly to one side, with head inclined attentively and tail feathers raised. Created by Carl Fabergé, celebrated court jeweler to Tsars Aleksandr III and Nikolai II of Russia, it is hallmarked with his name and initials of his leading master, Henrik Wigstroem. Present also is the numeral “72”, denoting the Russian standard of 18kt. gold. From the personal quarters of Tsar Nikolai II in the Aleksandr Palace, Tsarskoye Selo. Mrs. John L. Pratt March 2, 1939 FROM THE HAMMER COLLECTION – 682 FIFTH AVENUE – NEW YORK