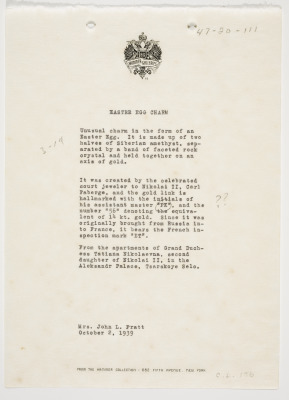 Transcription: [double-headed eagle] EASTER EGG CHARM Unusual charm in the form of an Easter Egg. It is made up of two halves of Siberian amethyst, separated by a band of faceted rock crystal and held together on an axis of gold. It was created by the celebrated court jeweler to Nikolai II, Carl Faberge, and the gold link is hallmarked with the initials of his assistant master “PK”, and the number “56” denoting the equivalent of 14 kt. gold. Since it was originally brought from Russia into France, it bears the French inscription mark “ET”. From the apartments of the Grand Duchess Tatiana Nikolaevna, second daughter of Nikolai II, in the Aleksandr Palace, Tsarskoye Selo. Mrs. John L. Pratt October 2, 1939 FROM THE HAMMER COLLECTION – 682 FIFTH AVENUE – NEW YORK