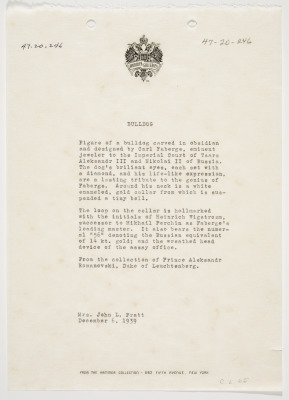 Transcription: [double-headed eagle] BULLDOG Figure of a bulldog cared in obsidian and designed by Carl Faberge, eminent jeweler to the Imperial Court of Tsars Aleksandr III and Nikolai II of Russia. The dog’s brilliant eyes, each set with a diamond, and his life-like expression, are a lasting tribute to the genius of Faberge. Around his neck is a white enameled, gold collar from which is suspended a tiny bell. The loop on the collar is hallmarked with the initials of Heinrich Wigstroen, successor to Mikhail Perchin as Faberge’s [sic] leading master. It also bears the numeral “56” denoting the Russian equivalent of 14 kt. gold; and the wreathed head device of the assay office. From the collection of Prince Aleksandr Romanovski, Duke of Leuchtenberg. Mrs. John L. Pratt December 6, 1939 FROM THE HAMMER COLLECTION – 682 FIFTH AVENUE – NEW YORK