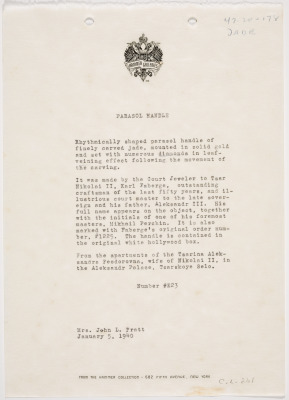 Transcription: [double-headed eagle] PARASOL HANDLE Rhythmically shaped parasol handle of finely carved jade, mounted in solid gold and set with numerous diamonds in leaf-veining effect following the movement of the carving. It was made by the Court Jeweler to Tsar Nikolai II, Karl Faberge, outstanding craftsman of the last fifty years, and illustrious court master to the late sovereign and his father, Aleksandr III. His full name appears on the object, together with the initials of one of his foremost masters, Mikhail Perchin. It is also marked with Faberge’s original order number, #1225. The handle is contained in the original white hollywood box. From the apartments of the Tsarina Alexandra Feodorovna, wife of Nikolai II, in the Aleksandr Palace, Tsarskoye Selo. Number #E23 Mrs. John L. Pratt January 5, 1940 FROM THE HAMMER COLLECTION – 682 FIFTH AVENUE – NEW YORK