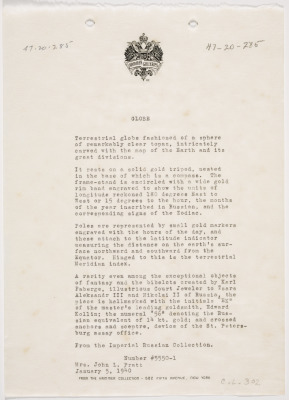 Transcription: [double-headed eagle] GLOBE Terrestrial globe fashioned of remarkably clear topaz, intricately carved with a map of the Earth and its great divisions. It rests on a solid gold tripod, nested in the base of which is a compass. The frame-stand is encircled with a wide gold rim band engraved to show the units of longitude reckoned 180 degrees East to West or 15 degrees to the hour, the months of the year inscribed in Russian, and the corresponding signs of the Zodiac. Poles are represented by small gold markers engraved with the hours of the day, and these attach to the latitude indicator measuring the distance on the earth’s surface northward and southward from the Equator. Hinged to this is the terrestrial Meridian index. A rarity even among the exceptional objects of fantasy and the bibelots created by Karl Faberge, illustrious Court Jeweler to Tsars Aleksandr III and Nikolai II of Russia, the piece is hallmarked with the initials “EK” of the master’s leading goldsmith, Edward Kollin; the numeral “56” denoting the Russian equivalent of 14 kt. gold; and crossed anchors and sceptre, device of the St. Petersburg assay office. From the Imperial Russian Collection. Number 5550-1 Mrs. John L. Pratt January 5, 1940 FROM THE HAMMER COLLECTION – 682 FIFTH AVENUE – NEW YORK