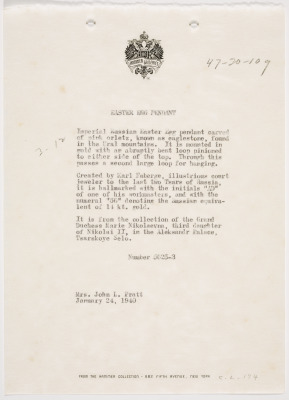 Transcription: [double-headed eagle] EASTER EGG PENDANT Imperial Russian Easter Egg pendant carved of pink orletz, known as eaglestone, found in the Ural mountains. It is mounted in gold with an abruptly bent loop pinioned to either side of the top. Through this passes a second large loop for hanging. Created by Karl Faberge, illustrious court jeweler to the last two Tsars of Russia, it is hallmarked with the initials “AD” of one of his workmasters, and with the numeral “56” denoting the Russian equivalent of 14 kt. gold. It is from the collection of the Grand Duchess Marie Nikolaevna, third daughter of Nikolai II, in the Aleksandr Palace, Tsarskoye Selo. Number 5625-3 Mrs. John L. Pratt January 24, 1940 FROM THE HAMMER COLLECTION – 682 FIFTH AVENUE – NEW YORK