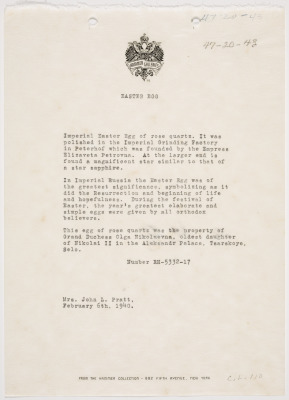 Transcription: [double-headed eagle] EASTER EGG Imperial Easter Egg of rose quartz. It was polished in the Imperial Grinding Factory in Peterhof which was founded by the Empress Elizaveta Petrovna. At the larger end is found a magnificent star similar to that of a star sapphire. In Imperial Russia the Easter Egg was of the greatest significance, symbolizing as it did the Resurrection and beginning of life and hopefulness. During the festival of Easter, the year’s greatest elaborate and simple eggs were given by all orthodox believers. This egg of rose quartz was the property of Grand Duchess Olga Nikolaevna, oldest daughter of Nikolai II, in the Aleksandr Palace, Tsarskoye, [sic] Selo. Number RH-5332-17 Mrs. John L. Pratt February 6, 1940 FROM THE HAMMER COLLECTION – 682 FIFTH AVENUE – NEW YORK