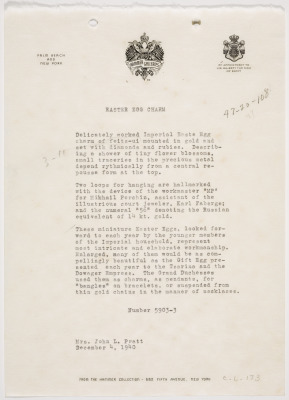 Transcription: [double-headed eagle] EASTER EGG CHARM Delicately worked Imperial Easte[r] Egg charm of fete-ui mounted in gold and set with diamonds and rubies. Describing a shower of tiny flower blossoms, small traceries in the precious metal depend rhythmically from a central repousse form at the top. Two loops for hanging are hallmarked with the device of the workmaster “MP” for Mikhail Perchin, assistant of the illustrious court jeweler, Karl Faberge; and the numeral “56” denoting the Russian equivalent of 14 kt. gold. These miniature Easter Eggs, looked forward to each year by the younger members of the Imperial household, represent most intricate and elaborate workmanship. Enlarged, many of them would be as compellingly beautiful as the Gift Egg presented each year to the Tsarina and the Dowager Empress. The Grand Duchesses used them as charms, as pendants, for “bangles” on bracelets, or suspended from thin gold chains in the manner of necklaces. Number 5903-3 Mrs. John L. Pratt December 4, 1940 FROM THE HAMMER COLLECTION – 682 FIFTH AVENUE – NEW YORK