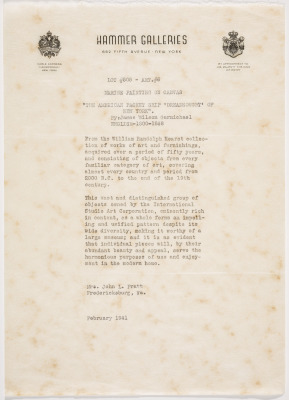 Transcription: [On Hammer Galleries stationery, insignia of the Galleries with its double-headed eagle to the left of header; to the right, insignia with the inscription “By appointment to His Majesty the King of Egypt] HAMMER GALLERIES 682 FIFTH AVENUE – NEW YORK LOT #505 – ART. 6 MARINE PAINTING ON CANVAS “THE AMERICAN PACKET SHIP ‘DREADNOUGHT’ OF NEW YORK”. By: James Wilson Carmichael ENGLISH-1800-1868 From the William Randolph Hearst collection of works of art and furnishings, acquired over a period of fifty years, and consisting of objects from every familiar category of art, covering almost every country and period from 2000 B.C. to the end of the 19th century. This vast and distinguished group of objects owned by the International Studio Art Corporation, eminently rich in content, as a whole forms an impelling and unified pattern despite its wide diversity, making it worthy of a large museum; and it is as evident that individual pieces will, by their abundant beauty and appeal, serve the harmonious purposes of use and enjoyment in the modern home. Mrs. John L. Pratt Fredericksburg, Va. February 1941