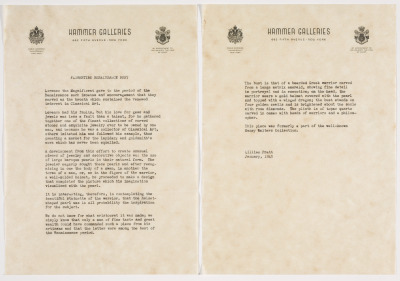 Transcription: [On Hammer Galleries stationery, insignia of the Galleries with its double-headed eagle to the left of header; to the right, insignia with the inscription “By appointment to His Majesty the King of Egypt] FLORENTINE RENAISSANCE BUST Lorenzo the Magnificent gave to the period of the Renaissance such impetus and encouragement that they served as the brush [??] which [??] the renewed interest in Classical Art. Lorenzo had his faults, but his love for gems and jewels was less a fault than a talent, for he gathered together one of the finest collections of carved stones and exquisite jewelry ever to be owned by one man, and because he was a collector of Classical Art, others imitated him and followed his example, thus creating a market for the lapidary and goldsmith’s work which has never been equalled. [sic] A development from this effort to create unusual pieces of jewelry and decorative objects was the use of large baroque pearls in their natural form. The jeweler eagerly bought these pearls and after recognizing in one the body of a swan, in another the torso of a man, or, as in the figure of the warrior, a well-molded [?] helmet, he proceeded to make a design that completed the picture which his imagination visuallized [sic] with the pearl. It is interesting, therefore, in contemplating the beautiful statuette of the warrior, that the helmet-shaped pearl was in all possibility the inspiration for the subject. We do not know for what aristocrat it was made; we simply know that only a man of fine taste and great wealth could have commanded such a piece from his artisans and that the latter were among the best of the Renaissance period. The best is that of a bearded Greek warrior carved from a large matrix emerald, showing fine detail in portrayal and in execution; on the head the warrior wears a gold helmet covered with the pearl and topped with a winged dragon; the bust stands on four golden snails [??] and is brightened about the [??] with rose diamonds. The plinth is of topaz quartz carved in cameo [??] with heads of warriors and a philosopher. This piece was formerly a part of the well-known Henry Walters Collection. Lillian Pratt January, 1945