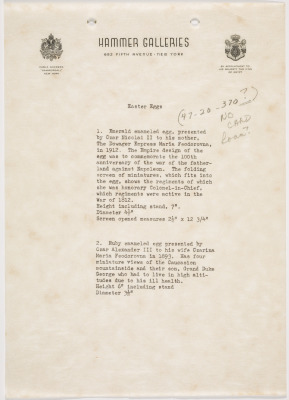 Transcription: [On Hammer Galleries stationery, insignia of the Galleries with its double-headed eagle to the left of header; to the right, insignia with the inscription “By appointment to His Majesty the King of Egypt] Easter Eggs 1. Emerald enameled egg, presented by Czar Nicolai II to his mother, The Dowager Empress Maria Feodorovna, in 1912. The Empire design of the egg was to commemorate the 100th anniversary of the war of the fatherland against Napoleon. The folding screen of miniatures, which fits into the egg, shows the regiments of which she was honorary Colonel-in-Chief, which regiments were active in War of 1812. Height including stand, 7". Diameter, 4 ½" Screen opened measures 2 ½" x 12 ¾" 2. Ruby enameled egg presented by Czar Alexander III to his wife Czarina Maria Feodorovna in 1893. Has four miniature views of the Caucasian mountainside, and their son, Grand Duke George who had to live in high altitudes due to his ill health. Height 6" including stand Diameter 3 ½"