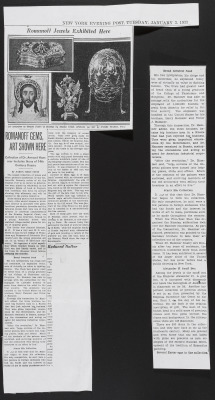 Transcription: NEW YORK EVENING POST. TUESDAY, JANUARY 3, 1933 Romanoff Jewels Exhibited Here Art treasures of former rulers of Russias on display today. (Picture on left is by Parade Studios, Inc.) ROMANOFF GEMS, ART SHOWN HERE Collection of Dr. Armand Hammer Includes Ikons of 14th Century Russia By AARON MARC STEIN The largest collection of jewels and other personal possessions of the Romanoffs, formerly rulers of all the Russias, ever to be shown in America, has been placed on exhibition in the Georgian Room at Lord & Taylor’s. The collection will have its private showing this afternoon and will be opened to the public tomorrow. Ikons dating back to the fourteenth century, other sacred images in which each nimbus is incrusted with gems, furniture, porcelains, brocades and the fabulous jewels that were one of the oriental or medieval characteristics of the Russian Imperial Court, are included in the collection, formed by a young American doctor who searched village market places for relics of imperial glory. The doctor was Armand Hammer, M.D. It was a very new M.D. conferred on him by the College of Physicians and Surgeons of Columbia University, and the young physician set out on an errand of adventure and mercy. He organized a relief expedition which reached Russia in 1921. Civil war had hardly ended, and in the Urals Dr. Hammer found famine sweeping the country. […] Another of these eggs is of lapis lazuli covered with an elaborate gold filligree. Approximately the size of an ostrich egg, it is lavishly jeweled and set with a square flat diamond into which is cut the monogram of the Empress and the date. This egg was the gift of the late Czar to his wife. When opened this egg contains a double eagle set with diamonds and a miniature portrait of the Czarevitch, done in the full round. The bust portrait of the little Prince in his sailor suit is handled in a naturalistically life-like manner. […]