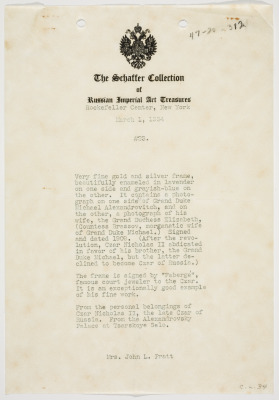 Transcription: [double-headed eagle] The Schaffer Collection of Russian Imperial Art Treasures Rockefeller Center, New York March 1, 1934 #23. Very fine gold and silver frame, beautifully enameled in lavender on one side and grayish-blue on the other. It contains a photograph on one side of Grand Duke Michael Alexandrovitch, and on the other, a photograph of his wife, the Grand Duchess Elizabeth, (Countess Brassov, morganatic wife of Grand Duke Michael.) Signed and dated 1909. (After the revolution, Czar Nicholas II abdicated in favor of his brother, the Grand Duke Michael, but the latter declined to become Czar of Russia.) The frame is signed by “Fabergé”, famous court jeweler to the Czar. It is an exceptionally good example of his fine work. From the personal belongings of Czar Nicholas II, the late Czar of Russia. From the Alexandrovsky Palace at Tsarskoye Selo.