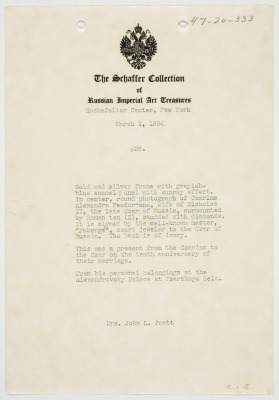 Transcription: [double-headed eagle] The Schaffer Collection of Russian Imperial Art Treasures Rockefeller Center, New York March 1, 1934 #38. Gold and silver frame with grayish-blue enamel panel with sunray effect. In center, round photograph of Czarina Alexandra Feodorovna, wife of Nicholas II, the late Czar of Russia, surmounted by Roman ten (X), studded with diamonds. It is signed by the well-known master, “Fabergé”, court jeweler to the Czar of Russia. The back is of ivory. This was a present from the Czarina to the Czar on the tenth anniversary of their marriage. From his personal belongings at the Alexandrovsky Palace at Tsarskoye Selo.