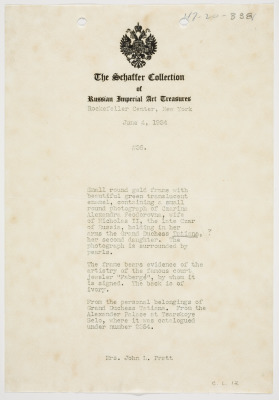 Transcription: [double-headed eagle] The Schaffer Collection of Russian Imperial Art Treasures Rockefeller Center, New York June 4, 1934 #36 Small round gold frame with beautiful green translucent enamel, containing a small round photograph of Czarina Alexandra Feodorovna, wife of Nicholas II, the late Czar of Russia, holding in her arms the Grand Duchess Tatiana [name underlined in pencil with ? following name], her second daughter. The photograph is surrounded by pearls. The frame bears evidence of the artistry of the famous court jeweler “Fabergé”, by whom it is signed. The back is ivory. From the personal belongings of the Grand Duchess Tatiana. From the Alexander Palace at Tsarskoye Selo, where it was catalogued under the number 2354.