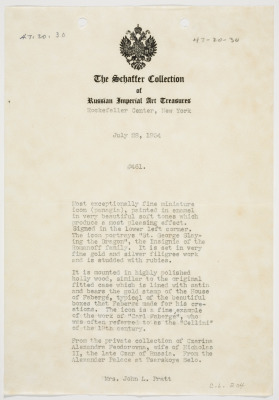 Transcription: [double-headed eagle] The Schaffer Collection of Russian Imperial Art Treasures Rockefeller Center, New York July 28, 1934 #461 Most exceptionally fine miniature icon (panagia), painted in enamel in very beautiful soft tones which produce a most pleasing effect. Signed in the lower left corner. The icon portrays “St. George Slaying the Dragon”, the Insignia of the Romanoff family. It is set in very fine gold and silver filigree work and is studded with rubies. It is mounted in highly polished holly wood, similar to the original fitted case which is lined with satin and bears the gold stamp of the House of Fabergé, typical of the beautiful boxes that Fabergé made for his creations. The icon is a fine example of the work of “Carl Fabergé”, who was often referred to as the “Cellini” of the 19th century. From the private collection of Czarina Alexandra Feodorovna, wife of Nicholas II, the late Czar of Russia. From the Alexander Palace at Tsarskoye Selo.