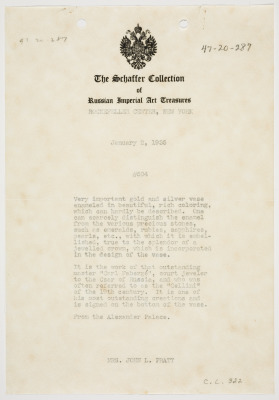 Transcription: [double-headed eagle] The Schaffer Collection of Russian Imperial Art Treasures ROCKEFELLER CENTER, NEW YORK January 2, 1935 #504 Very important gold and silver vase enameled in beautiful, rich coloring, which can hardly be described. One can scarcely distinguish the enamel from the various precious stones, such as emeralds, rubies, sapphires, pearls, etc., with which it is embellished, true to the splendor of a jewelled [sic] crown, which is incorporated in the design of the vase. It is the work of that outstanding master “Carl Fabergé”, court jeweler to the Czar of Russia, and who was often referred to as the “Cellini” of the 19th century. It is one of his most outstanding creations and is signed on the bottom of the vase. From the Alexander Palace.