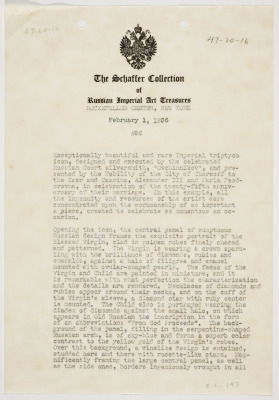 Transcription: [double-headed eagle] The Schaffer Collection of Russian Imperial Art Treasures ROCKEFELLER CENTER, NEW YORK February 1, 1936 #92 Exceptionally beautiful and rare Imperial triptych icon, designed and executed by the celebrated Russian Court silversmith, “Ovchinnikov”, and presented by the Nobility of the City of Charcoff to the Czar and Czarina, Alexander III [sic] and Maria Feodorovna, in celebration of the twenty-fifth anniversary of their marriage. In this example, all the ingenuity and resources of the artist were concentrated upon the workmanship of so important a piece, created to celebrate so momentous an occasion. Opening the icon, the central panel of sumptuous Russian design frames the exquisite portrait of the Blessed Virgin, clad in golden robes finely chased and patterned. The Virgin is wearing a crown sparkling with the brilliance of diamonds, rubies and emeralds, against a halo of filigree and enamel mounted with ovular-shaped pearls. The faces of the Virgin and Child are painted in miniature, and it is remarkable with what perfection the characterization and the details are rendered. Necklaces of diamonds and rubies appear around their necks, and on the cuff of the Virgin’s sleeve, a diamond star with ruby center is mounted. The Child is also portrayed wearing the diadem of diamonds against the small halo, on which appears in Old Russian the inscription in the form of an abbreviation: “From God Proceeds”. The background of the panel, filling in the serpentine-shaped Russian arch, is of sky-blue and forms a superb color contrast to the yellow gold of the Virgin’s robes. Over this background, a vinelike design is entwined, studded here and there with rosette-like stars. Magnificently framing the large central panel, as well as the side ones, borders ingeniously wrought in all different types of chasing and filigree work are set with a variety of rubies, emeralds and sapphires, interspersed with rectangular panels done in soft shades of blue and red matte enamel. The side panels appropriately depict in fine relief, left, “St. Alexander Nevsky” (the patron saint of Alexander III [sic]), in armor and wearing ermine robes wrought in virgin silver, and on the right, “St. Maria Magdalene”, (the patron saint of Maria Feodorovna). Above each at left and right, guardian angels kneel in the clouds in an attitude of devotion. Closed, the icon presents the fine filigree exterior framed in enamel, in the center of which there is a large Greek Catholic cross studded with rubies and sapphires. The reverse is inscribed as follows: “To Their Imperial Majesties from the Nobility of Charcoff. 1866-1891. October 28.” It is signed by the artist “Ovchinnikov” and dated “1891”, the year of its presentation to the Emperor and Empress of Russia. It is considered the finest jeweled icon ever created in Russia, and is the best witness to the mastery of this great artist. From the Alexandrovsky Palace at Tsarskoye Selo.