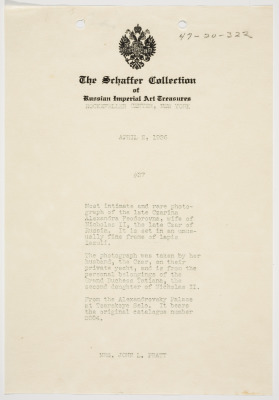 Transcription: [double-headed eagle] The Schaffer Collection of Russian Imperial Art Treasures ROCKEFELLER CENTER, NEW YORK April 2, 1936 #37 Most intimate and rare photograph of the late Czarina Alexandra Feodorovna, wife of Nicholas II, the late Czar of Russia. It is set in an unusually fine frame of lapis lazuli. The photograph was taken by her husband, the Czar, on their private yacht, and is from the personal belongings of the Grand Duchess Tatiana, the second daughter of Nicholas II. From the Alexandrovsky Palace at Tsarskoye Selo. It bears the original catalogue number 2004.