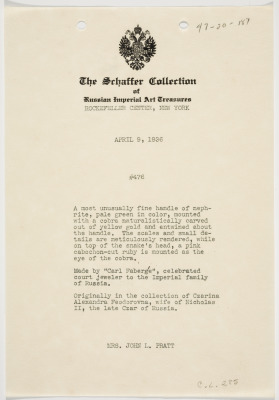 Transcription: [double-headed eagle] The Schaffer Collection of Russian Imperial Art Treasures ROCKEFELLER CENTER, NEW YORK April 9, 1936 #476 A most unusually fine handle of nephrite, pale green in color, mounted with a cobra naturalistically carved out of yellow gold and entwined about the handle. The scales and small details are meticulously rendered, while on top of the snake’s head, a pink cabochon-cut ruby is mounted as the eye of the cobra. Made by “Carl Fabergé”, celebrated court jeweler to the Imperial family of Russia. Originally in the collection of Czarina Alexandra Feodorovna, wife of Nicholas II, the late Czar of Russia.