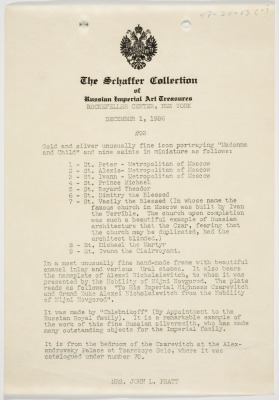 Transcription: [double-headed eagle] The Schaffer Collection of Russian Imperial Art Treasures ROCKEFELLER CENTER, NEW YORK December 1, 1936 #93 Gold and silver unusually fine icon portraying “Madonna and Child” and nine saints in miniature as follows: 1 – St. Peter – Metropolitan of Moscow 2 – St. Alexis – Metropolitan of Moscow 3 – St. Ivann – Metropolitan of Moscow 4 – St. Prince Michael 5 – St. Boyard Theodor 6 – St. Dimitry the Blessed 7 – St. Vasily the Blessed (In whose name the famous church in Moscow was built by Ivan the Terrible. The church upon completion was such a beautiful example of Russian architecture that the Czar, fearing that the church might be duplicated, had the architect blinded.) 8 – St. Michael the Martyr 9 – St. Ivann the Clairvoyant In a most unusually fine hand-made frame with beautiful enamel inlay and various Ural stones. It also bears the nameplate of Alexei Nicholaievitch, to whom it was presented by the Nobility of Nijni Novgorod. The plate reads as follows: “To His Imperial Highness Czarevitch and Grand Duke Alexei Nicholaievitch from the Nobility of Nijni Novgorod.” It was made by “Chlebnikoff” (By Appointment to the Russian Royal Family). It is a remarkable example of the work of this fine Russian silversmith, who has made many outstanding objects for the Imperial family. It is from the bedroom of the Czarevitch at the Alexandrovsky Palace at Tsarskoye Selo, where it was catalogued under number 70.