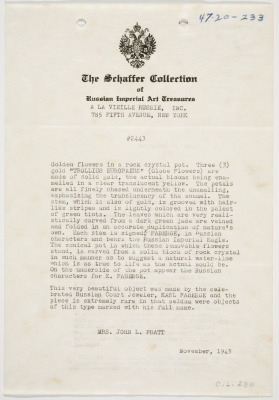 Golden flowers in a rock crystal pot. Three (3) gold “TROLLIUS EUROPAEUS” (Globe Flowers) are made of solid gold, the actual blooms being enamelled (sic) in a clear translucent yellow. The petals are all finely chased underneath the enamelling (sic), emphasizing the translucency of the enamel. The stem, which is also of gold, is grooved with hair-like stripes and is lightly colored in the palest of green tints. The leaves which are very realistically carved from a dark green jade are veined and folded in an accurate duplication of nature’s own. Each stem is signed, K. FABERGE, in Russian characters and bears the Russian Imperial Eagle. The conical pot in which these removable flowers stand, is carved from a solid block of rock crystal in such manner as to suggest a natural water-line which is as true to life as the actual would be. On the underside of the pot appear the Russian characters for K. FABERGE.

This very beautiful object was made by the celebrated Russian Court Jeweler, KARL FABERGE and the piece is extremely rare in that seldom were objects of this type marked with his full name.