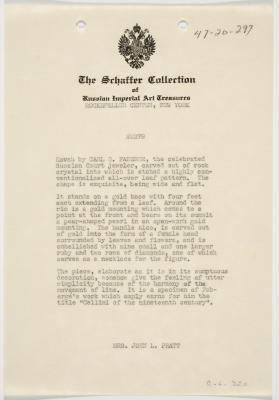 #2279 Kovsh by CARL G. FABERGE, the celebrated Russian Court jeweler, carved out of rock crystal into which is etched a highly conventionalized all-over leaf pattern. The shape is exquisite, being wide and flat. It stands on a gold base with four feet each extending from a leaf. Around the rim is a gold mounting which comes to a point at the front and bears on its summit a pear-shaped pearl in an open-work gold mounting. The handle also, is carved out of gold into the form of a female head surrounded by leaves and flowers, and is embellished with nine small and one larger ruby and two rows of diamonds, one of which serves as a necklace for the figure. The piece, elaborate as it is in its sumptuous decoration, somehow give the feeling of utter simplicity because of the harmony of the movement of line. It is a specimen of Fabergé’s work which amply earns for him the title “Cellini of the nineteenth century”.