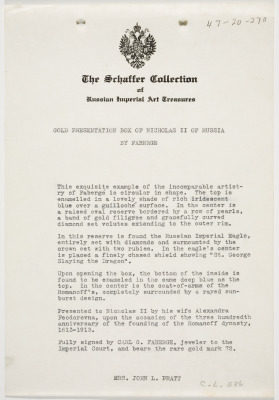 GOLD PRESENTATION BOX OF NICHOLAS II OF RUSSIA BY FABERGE This exquisite example of the incomparable artistry of Fabergé is circular in shape. The top is enamelled [sic] in a lovely shade of rich iridescent blue over a guilloché surface. In the center is a raised oval reserve bordered by a row of pearls, a band of gold filigree and gracefully curved diamond set volutes extending to the outer rim. In this reserve is found the Russian Imperial Eagle, entirely set with diamonds and surmounted by the crown set with two rubies. In the eagle’s center is placed a finely chased shield showing “St. George Slaying the Dragon”. Upon opening the box, the bottom of the inside is found to be enameled in the same deep blue as the top. In the center is the coat-of-arms of the Romanoff’s, completely surrounded by a rayed sunburst design. Presented to Nicholas II by his wife Alexandra Feodorovna, upon the occasion of the three hundredth anniversary of the founding of the Romanoff dynasty, 1613-1913. Fully signed by CARL G. FABERGE, jeweler to the Imperial Court, and bears the rare gold mark 72.