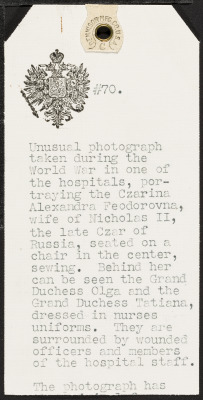 Transcription: [double-headed eagle] #70 Unusual photograph taken during the World War in one of the hospitals, portraying the Czarina Alexandra Feodorovna, wife of Nicholas II, the late Czar of Russia, seated on a chair in the center, sewing. Behind her can be seen the Grand Duchess Olga and the Grand Duchess Tatiana, dressed in nurses uniforms. They are surrounded by wounded officers and members of the hospital staff. The photograph has the original frame, the simplicity of which is surprising, and is from the personal belongings of Grand Duchess Tatiana, the second daughter of Nicholas II. From the Alexander Palace at Tsarskoye Selo, where it was catalogued under number 1955. $60.00